This literature review looks at Cervical Injuries that occur during participation in sport. It looks at injuries that happen in sport with frequent impact, e.g. Rugby and American Football, and also injuries due to continuous strain induced by high G-forces, e.g. Motorsport and Bob-Skeleton.

The aims of this literature review are to establish: 1) Which muscles stabilise the neck? 2) Which Cervical Strengthening (CS) exercises are most effective? 3) Whether cervical strengthening is effective for rehabilitation and injury prevention? 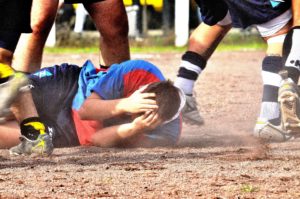 Spine Injuries in Motorsport and Bob-Skeleton

Cervical spines of racing drivers and bob-skeleton athletes are affected by gravity force (g-force) related stressors causing axial force, vibration, mechanical shock, whiplash injuries and concussion (Mansfield & Marshall, 2001; Minoyama & Tsuchida, 2004; Engebretsen et al., 2010). These forces cause sheering, buckling and strain on the cervical region together with accidents that may have impact of more than 25G’s (http://www.bbc.co.uk/sport/0/formula1/24976578). A study of single seated car races found 1.2 injuries per 1000 competitors per race and 0.9 injuries per 1000 competitors per single saloon car race. Saloon drivers suffered 53.2% cervical sprain injuries (Minoyama & Tsuchida (2004).
The bob-skeleton is a small sled without brakes. The athlete drops onto the sled in prone and reaches speeds of 120-135km/hr while g-forces can exceed 5G’s at various angulations including labyrinth track or hairpin bends. Helmets are the only head protection against high g-forces and accidents (http://www.olympic.org/skeleton). During the Winter Olympics 2010, 6% of Bob-skeleton athletes suffered cervical injuries and 5% suffered concussion (Engebretsen et al., 2010). Cervical injuries occur in collision and g-force related sports resulting in injury.
Strength training is suggested as rehabilitation and injury prevention in these sports. However the effectiveness of cervical strengthening (CS) is questionable.

The deep cervical flexors (DCF) and extensors (DCE) create a stabilising sleeve around the spine and become dysfunctional during cervical disorders (Falla et al., 2004c; O’Leary et al., 2013). If a specific stabilising muscle group is targeted and trained accurately, an increase muscle activity would cause directional stability and reduce the spinal neutral zone (Panjabi, 1992a & Panjabi, 1992b).
DCE
The DCE: Semispinalis cervicis, Multifidus, Rotatores muscles and the cranio-cervical extensors function as the dorsal inter-segmental neck stabilisers, producing extension and located close to the vertebrae. Multifidus consist of 77% Type I and 23% Type II fibre composition with small moment arms to create only capacity of 1Nm but fibre type can be transient to type II (Uhlig et al., 1995; Boyed-Clarke et al., 2002; Anderson et al., 2005). Due to changes on Cross-sectional area (CSA), DCE muscle dysfunction is implied in whiplash and cervical pain (Elliott et al., 2006; Elliott et al., 2008). In addition, reduced muscle activation has been shown on muscle functional MRI (mfMRI) (O’Leary et al., 2012). Future research in dynamic situation is required to assess muscle activation in various dynamic exercise via mfMRI.
Longus Colli & Capitis (DCF)
The DCF is a spinal stabiliser controlling the cervical lordosis and intervertebral motion (Mayoux-Benhamou et al., 1994). A CSA of Longus Colli demonstrated 53% type I and 47% type II fibre composition indicating a phasic as well as a postural function (Boyed-Clarke et al., 2001). The DCF fibres attach to the cervical vertebral laminae and maintain the cervical posture against gravity and have an antagonistic relationship with Multifidus (Mayoux-Benhamou et al., 1994). The superficial flexors Anterior Scaleni (AS) & Sternocleidomastoid (SCM) are unable to control the segmental motion and result in uncontrolled motion if no DCF activation occurs (Falla et al., 2007). The AS & SCM EMG measurements will increase due to over activity while the DCF will have reduced muscle activation. Fatigue sets in if overtraining occurs at low loading and is more apparent at 25% of the maximal voluntary contraction (MVC). When planning a training programme excessive loading and fatigue must be avoided to avoid since it will result in deactivation of the DCF (Falla et al., 2004e).
Initially, the DCF was described as one functional unit (Falla et al., 2004a; Falla et al., 2004d). Recently, it was confirmed by mfMRI that the DCF is activated during cranio-cervical flexion (CCF). It showed that Longus Colli functions optimally to control the cervical lordosis during CCF while Longus Capitis controls CCF with cervical flexion (CF) (Cagnie et al., 2008). 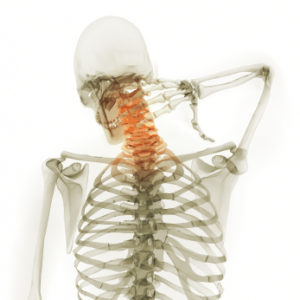 Using low cost Theraband for isometric, concentric and eccentric CS, which can be performed in any direction. Initially, starting with isometric training in the neutral position reduced risk of injury to the cervical structures exist (Qureshi & Hecht, 2010). However, research has shown that painful necks of females can be strengthened with a high load of 1x15reps of 80% of maximal isometric contraction 5x.week-1, and then reduced to 3x.week-1. Theraband has significantly strengthened isometric cervical flexion (+110%), Rotation (+76%), and extension (+69%) in combination with aerobic exercises (Ylinen et al., 2003). In the 2 year – follow-up muscle strength had improved by 44% flexion and rotation together with 27% in extension (Ylinen et al., 2006). Cervicogenic headache in females improved by using high loading strengthening and endurance Theraband exercises 5x.week-1 (Ylinen et al., 2010). Theraband can safely be used during initial rehabilitation to reduce pain and headache by doing relatively high isometric resistance 3-5x.week-1.
In a study of fighter pilots during flight, EMG muscle activation was recorded to determine how much training load is required to avoid injury at various Gz-levels. At low Gz-levels (+1Gz) training load should be performed at 15% of a maximal voluntary contraction (MVC). Training with Theraband is indicated for athletes who participate at very low G-forces or during initial rehabilitation (Netto et al., 2007).
It has been shown that Theraband causes lower EMG peak muscle activation in comparison to Cybex and provides less resistance during strengthening (Burnett et al., 2008).

Dynamic strengthening and progressive loading with isokinetics are used effectively in final rehabilitation or injury prevention in healthy subjects. It has been shown that training at 3x.week-1 for 12 weeks with progressive loading increases muscle strength. Male aviators followed a dynamic resistance programme for flexion and extension at 40% and 75% of 10RM, but were tested isometrically and dynamically. Isometric improvement shown after 4 weeks was 32.7% and at 8 weeks it was 32.7%. Extension improved in all the weeks significantly. Dynamic strength improved 39.2% after 8 weeks and 49.3% at 12 weeks (Taylor et al., 2006). Strength training duration should be 10-12 weeks for neural adaptation and hypertrophic changes to take place in the muscle (Taylor et al., 2006). It is evident that dynamic testing values are much higher which may question differences of assessment methods. Isokinetic strength training is measured with ease, however due to differing equipment used during studies and different populations it is challenging to make a reliable comparison between studies. Additionally isokinetic units are expensive and training is not performed in a sport specific position (Burnett et al., 2008).

The MVU is used in the aviation industry. A study was performed using dynamic concentric and eccentric loading at 24-114% of MVC for 2x.week-1 for a duration of 10 weeks. It demonstrated MVC significantly improved isometric neck strength (64.4% Flexion; 62.9% Extension; and 62.9% Left lateral flexion) in comparison to Control. Theraband improved 42% for Flexion only (Burnett et. al, 2005).

Interestingly, good results have been shown in current rugby trends (iCSP-discussion), using a dynamic force equalising system (patent 2012-E80664(56) that permits active rotation and movement while functional training takes place to enhance the head being stationary and integrating reflex activity of the senses and vestibulum (www.gatheresystems.com, Peek & Gatherer, 2005; Brooks & Kemp, 2011). The system causes strengthening in an active movement and is controlled. It excludes harmful axial and shear forces during training in sport specific positioning. It can be used for rehabilitation and injury prevention. Further investigation is required.

3. Is strength training effective for rehabilitation and injury prevention?

Protective equipment and improved skill help avoid neck injuries. In a comparative neck strength study, no differences were found between asymptomatic aviators exposed to G-forces and non-aviators (Seng et al., 2003). It was suggested that it was due to the use of protective equipment. Technique modification is also suggested in rugby to prevent injuries (Brooks & Kemp, 2010). Training positions needs to be taken in account when strengthening and enhanced tackling skills according to player position will prevent injuries (McIntosh et al., 2010).

A certain training mode would produce specific results (O’Leary et al., 2012). A study that used slow isoinertial CS in football, resulted in minimal improvements with no EMG muscle activation changes whilst performing a tackle. In another study, involving footballers, an 8 week isotonic resistance programme was performed and head-neck dynamic stability was then tested by unanticipated weights that were dropped from a small height. Although the isometric strength did improve by 15%, no dynamic head-neck segment stability, muscle stiffness or EMG differences, were found (Mansell et al., 2005). Plyometric training was suggested. It is possible that insufficient loading was used in training and that exercises were not in a dynamic mode or perhaps an insufficient motor learning pattern (Lisman, 2009; Falla et al., 2013). Specific strength training requires a specific training mode to achieve the end goal.

It is suggested that during an anticipation action, muscle tone would increase however if the impact is unanticipated an injury would occur (Mihalik et al., 2011). During tackling, the axial loading causes loss of the cervical lordosis and subsequent buckling. Injuries occur in 2-31ms (measured at direct vertical loading while the player will be in an oblique position) while muscle reflex activating only happens at 60ms, however a certain amount of muscle stiffness would be present (Nightingale et al., 1996; Nightingale et al., 2000). Hence, if the player is able to anticipate the impact and by increasing the tone and stiffness, the impact may be reduced with lower risk of injury, indicating CS as a means of injury prevention.

Proprioception resistance training improves muscle strength. A recent study demonstrated that resistance together with proprioception improved cervical strength by 29.3% while the CSA increased by 18.9%-32.3% while the resistance only group improved by 8.9-9.9% (Kramer et al., 2013). Proprioception facilitates a neuromuscular response where the brain stimulates the cervical muscles causing hypertrophic changes in the proprioceptive group. The cervical spine needs to balance the head and stabilise the senses. There is an interaction between the vision stimuli and vestibular sense organ of the head together with the proprioceptors of the neck. In addition vision has a huge effect on the cervical spine muscle activation to perform at an optimum level (Keshner et al., 1995).

Cervical strengthening is used in the rehabilitation of cervical injuries and injury prevention of collision and G-force related sports. Strength training that integrates correcting the neuromuscular performance of DCE and DCF and then progressing with loading has shown to be successful in rehabilitation of cervical injuries. The programme needs to take factors like fatigue and pain and gender into account to optimise results. CS for injuries has not been refuted but may not be a single modality to achieve optimum response. Other protection, for example safety equipment and skill may provide additional benefit to prevent injuries. Further studies needs to consider the implementation of more neuromuscular training in combination with strength training to deliver optimum results in rehabilitation and for injury prevention in sport.

The contents of this article – Spine Injuries in Sport, is aimed at medical professionals. It is provided here for informational purposes only and should not be treated as medical or health management advice. The materials herein are not intended to be a substitute for professional medical advice, diagnosis, or treatment. Always seek the advice of your doctor, physiotherapist or other health care provider with any questions you may have regarding a medical condition. Never disregard professional medical advice or delay in seeking it because of something you have read in this article or website. Reliance on any information provided herein is solely at your own risk.

The content of this article – Spine Injuries in Sport, is copyright © 2016 of Suegnet Meyer and Meyer & Associates. Transmission or reproduction of the contents, beyond that allowed by fair use as defined in the copyright laws requires the written permission of the copyright owners.